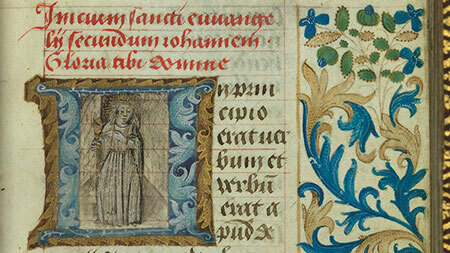 The collection’s best examples of Northern High and Late Medieval illumination now come from the Ferrell fond: a fully historiated, complete Parisian Bible, a masterfully painted Book of hours in grisailles, and a miniature of the Trinity from the “Master of the First Prayer Book of Maximilian” — the collection’s sole example of trompe l’oeil borders, which were perfected in Dutch manuscript painting.

Likewise, the gift also constitutes the collection’s most illustrative examples of Late Medieval Italian illumination: a cutting of John the Baptist painted by “The Second Master of the Antiphonary M of San Giorgio Maggiore”, and a leaf from an Office Book illuminated by the Franciscan friar, Fra Antonio da Monza. In addition to these examples of Italian painting, a tarot card depicting the biscione (serpent) of the Visconti-Sforza family of Milan provides a rare example of tarocchi popular among the Italian elite.

This exhibit is curated by David T. Gura, Curator of Ancient and Medieval Manuscripts.

All exhibits are free and open to the public during business hours.