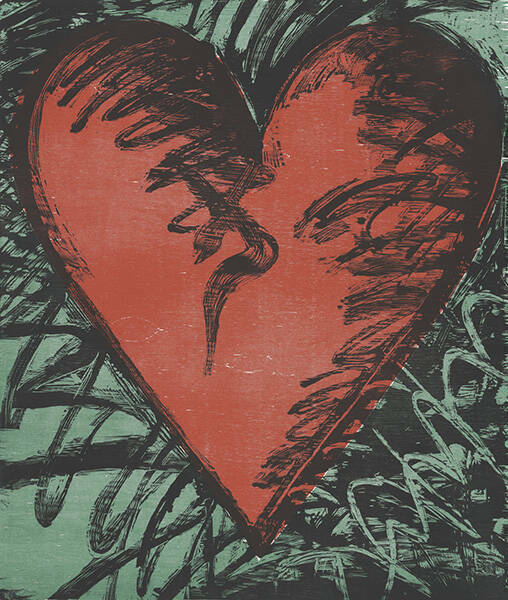 Jim Dine: American Icon. Made possible by the artist’s exceptional gift of a collection of 238 prints, covering nearly every aspect of Dine’s repertoire from 1969 to the present, the exhibition draws from the collection to highlight every significant facet of the artist’s renowned body of work.

Among the most distinguished figures in Contemporary art, Dine has been at the forefront of the American avant-garde since the Pop Art movement of the 1950s and ’60s. Born in Cincinnati, Dine attended the Art Academy of Cincinnati before transferring to Ohio University. Immediately following graduation, he moved to New York, fell in with Claes Oldenburg and Alan Kaprow, and participated in numerous Happenings in the late 1950s and early 1960s. His work was a vital presence in most of the Pop movement’s defining exhibitions. In contrast to the cool remove of Oldenburg’s and Andy Warhol’s work, and Roy Lichtenstein’s link to popular imagery, Dine focused on a series of icons that often held personal significance: images of tools, the heart, the “Venus de Milo,” and Pinocchio, among others, played a critical role in his iconography.

Best known for his paintings and sculpture, Dine is also among the most prodigious and prolific printmakers of his time, often combining techniques to a highly inventive end. The earliest works in the museum’s gift are lithographs and etchings from the late 1960s and notable woodcuts from the 1980s.

Dating to 1875, the University of Notre Dame art collections are among the most acclaimed in the United States. Dine’s transformative gift is among the largest and most distinguished presented to the University by a single artist; it both increases the museum’s holdings in Contemporary art and significantly contributes to its highly-regarded collection of works on paper.