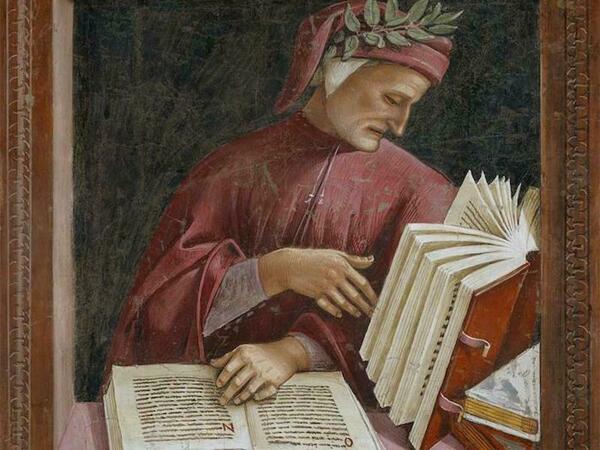 In connection with the 2021 Dante centenary, the Devers Program in Dante Studies and the Center for Italian Studies are organizing a year-long lecture series, which will be held on the Notre Dame campus throughout the 2021 calendar year. The aim of the series is to assess the ways in which Dante has impacted the literary and popular culture of the United States. The series is divided into six sessions. Each session will consist of two speakers who will speak for 30-45 minutes each. The series will address topics including translation, iconography, library collections, the Civil War era, African-American literary culture, American religious culture, American poetry and narrative, and Italian-American culture.

The Fall lectures are being planned in a hybrid online and in-person format. Please register here.

In “What Dante Means to Me,” a lecture he delivered in 1950, Eliot noted that “after forty years,” he still regarded Dante’s poetry “as the most persistent and deepest influence upon [his] own verse.” Indeed, Dante's influence on Eliot's poetry makes itself felt at every phase of Eliot's career, from "The Love-Song of J. Alfred Prufrock" to the end. This lecture will demonstrate, however, that Eliot's vision is very different from and in some respects even antithetical to Dante's. It focuses on how the two poets treat the question of desire and, in addition, on Eliot's "imitations" of Dante's terza rima in a passage from "Little Gidding" and in a late, not very well known poem, "To Walter de la Mare."

Henry Weinfield is an emeritus professor of Liberal Studies and English at the University of Notre Dame. He is a poet, translator, and literary scholar. His most recent collections of poetry are As the Crow Flies (Dos Madres 2021), A Wandering Aramaean: Passover Poems and Translations (Dos Madres 2012) and Without Mythologies: New and Selected Poems and Translations (Dos Madres 2008). His most recent study is The Blank-Verse Tradition from Milton to Stevens: Freethinking and the Crisis of Modernity (Cambridge 2012). His verse-translations include a version, with commentary, of the Collected Poems of Stéphane Mallarmé (University of California Press 1995) and (with Catherine Schlegel of Notre Dame’s Classics Department) a translation of Hesiod's Theogony and Works and Days (University of Michigan Press 2006). He is also the author of The Music of Thought in the Poetry of George Oppen and William Bronk (University of Iowa Press 2009), The Poet without a Name: Gray’s Elegy and the Problem of History (Southern Illinois University Press 1991), and many poems, essays, and articles.

Robert Duncan (1919-1988) is a pivotal American poet of the post-World War II generation that first came to prominence in the 1960 anthology The New American Poetry. Duncan calls himself a “derivative” poet, and Dante is one of his primary sources, to whom he returns for sustenance throughout his career. In his last book of poetry, Ground Work, Duncan wrote three series of poems he called “Dante Études,” in which he cites passages from Dante’s essays. From essays of his own, it is apparent that Duncan places Dante in direct conversation with Walt Whitman. In the “Dante Études,” drawing from his two precursors, Duncan develops a democratic politics that includes aesthetic innovation and ecological responsibility.

Stephen Fredman is an emeritus professor of English at the University of Notre Dame. His books include Poet's Prose: The Crisis in American Verse (Cambridge University Press, 1983, 1990); The Grounding of American Poetry: Charles Olson and the Emersonian Tradition (Cambridge University Press, 1993); A Menorah for Athena: Charles Reznikoff and the Jewish Dilemmas of Objectivist Poetry (University of Chicago Press, 2001); Contextual Practice: Assemblage and the Erotic in Postwar Poetry and Art (Stanford University Press, 2010); and most recently American Poetry as Transactional Art (University of Alabama Press, 2020). His research and teaching interests include modern poetry and poetics; prose poetry; Judaism & Modernism; California culture; poetry and performance art; collage theory; the question of tradition in American poetry; Indic thought and its impact upon American culture; poetry and pragmatism. He has been awarded NEH, ACLS, and Lilly fellowships.