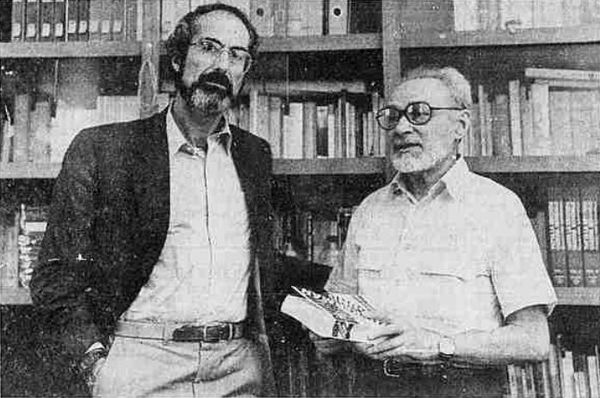 Sponsored by the Center for Italian Studies, Valentina Geri will examine the importance of Anglophone culture in Primo Levi’s work, beginning from his English-Italian palindrome from the short story “Calore vorticoso” (Lilít) – “In arts it is repose to life: è filo teso per siti strani.”

While the main scope of Geri’s larger project is to map and analyze those Anglophone authors who, for their very presence, are most important for Levi in the expression of his ideas, a preliminary study of what English and American cultures represented both for Levi and for other Italian authors in the aftermath of the Second World War is equally fundamental. The question here addressed is straightforward: since references to Anglophone authors are numerous in Levi’s texts, what was the status of Italian culture in relation to Anglophone culture in the pre- and post-war eras? Recent studies show that across the Twentieth century Italy saw, among other phenomena, an expanded openness to foreign literary influences, the birth of Italian “anglistica,” and a new attention to English translations.

Together with a consideration of the Italian cultural panorama, this seminar will question the specific ways in which Levi belongs to, or differs from, his cultural surroundings. In this regard, another simple question emerges: why are English and American cultures important to Levi? In order to provide an answer, the seminar takes into account those ideas and categories that Levi expresses in his consideration of the Anglophone world: the “hybridity” of the English language, which was almost absent in concentration camps; the role of English and American culture as a counter-culture in response to Fascism; the nature of American Jewishness and its peculiar character in the broader culture of the United States.

This analysis will help shed light on an important aspect of Levi’s textual production, that of intertextuality, and will argue that Anglophone culture represented a new and different cultural reference for Levi.

Valentina Geri’s research focuses on contemporary Italian literature and, specifically, on Primo Levi’s works. Already in her MA at Notre Dame, Valentina concentrated on the importance that intertextuality played in Levi’s texts, specifically concerning Shakespearean references. Valentina’s background is in Modern Languages and Literatures, specifically in English and German. She holds a BA and an MA from the University of Siena and she has been a visiting student both at University of Heidelberg, Germany and, in the U.S, at Colby College in Maine.