At the age of 15, Peter MacDonald, a Navajo from Teecnospos, AZ, enlisted in the U.S. Marine Corps. He went through boot camp at U.S. Marine Corps Recruit Depot (MCRD), San Diego, CA. Following regular combat and communication training at USMCB in Camp Pendleton, CA, MacDonald along with other Navajo Marines, was selected from other Marines for top secret Navajo Code School. During the final phase of World War II (1944-46) MacDonald served in South Pacific as Navajo Code Talker and North China with the Sixth Marine Division.

He was honorably discharged with a rank of Corporal. He went back to his home community of Teecnospos, AZ. After graduating from High School and Junior College in Muskogee, OK, MacDonald went to the University of Oklahoma and graduated with an Electrical Engineering degree (BSEE). He pursued graduate studies at UCLA while working as a Project Engineer on the Polaris Missile project for (Howard) Hughes Aircraft Company. MacDonald served as Project Manager for the manufacture of the Polaris Missile Guidance System and was a member of the elite Hughes Technical Staff (MTS).

MacDonald served as Chairman of the Navajo Nation from 1971-1983 and 1987-91. MacDonald was re-elected to the Office of the Chairman four times – unprecedented in Navajo history. MacDonald is co-founder of the Council of Energy Resource Tribes (CERT), the National Tribal Chairman Association, the American Indian National Band and the Native American Prep School. 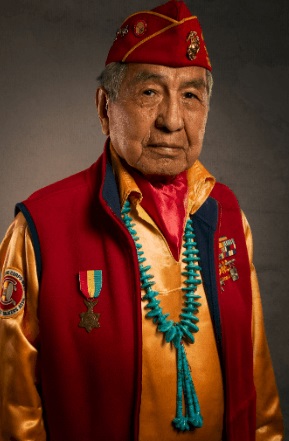 Among his many honors are: Recipient of Congressional Silver Medal for heroic service to the nation as a USMC Navajo Code Talker; University of Oklahoma Engineering Hall of Fame and Special Commendation by U.S. President Richard M. Nixon for “exceptional service to others”. In addition, MacDonald was featured in TIME magazine as one of 200 “Rising Leaders of America” in 1974.

He is married—has five children and nine grandchildren. Currently he lives with his wife, Wanda, on the Navajo reservation at Tuba City, AZ. MacDonald is presently President of the Navajo Code Talkers Museum and Veteran Center to honor Heroes of WWII; whose unique legacy, from 1942 thru 1945 helped win the war; transmitting top secret messages in every major battle in the pacific theatre. Navajo Code was the only military code in modern history never broken by an enemy.