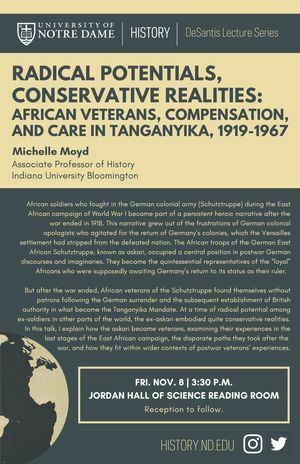 African soldiers who fought in the German colonial army (Schutztruppe) during the East African campaign of World War I became part of a persistent heroic narrative after the war ended in 1918. This narrative grew out of the frustrations of German colonial apologists who agitated for the return of Germany’s colonies, which the Versailles settlement had stripped from the defeated nation. The African troops of the German East African Schutztruppe, known as askari, occupied a central position in postwar German discourses and imaginaries. They became the quintessential representatives of the “loyal” Africans who were supposedly awaiting Germany’s return to its status as their ruler.

But after the war ended, African veterans of the Schutztruppe found themselves without patrons following the German surrender and the subsequent establishment of British authority in what became the Tanganyika Mandate. At a time of radical potential among ex-soldiers in other parts of the world, the ex-askari embodied quite conservative realities. In this talk, I explain how the askari became veterans, examining their experiences in the last stages of the East African campaign, the disparate paths they took after the war, and how they fit within wider contexts of postwar veterans’ experiences.