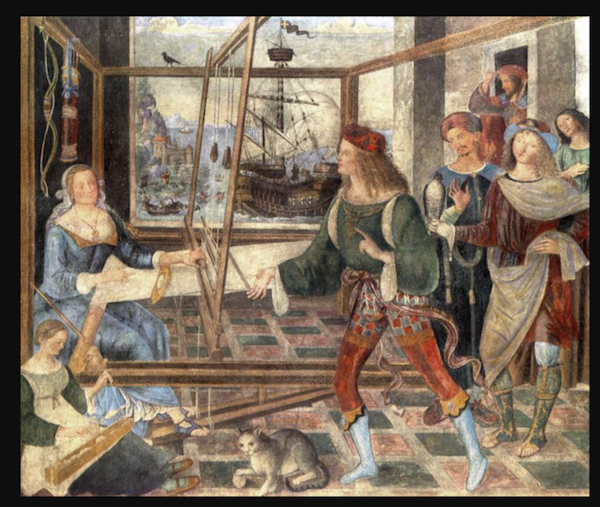 The Center for Italian Studies presents the third annual Ravarino Lecture delivered by Lucia Re, professor of Italian at the University of California, Los Angeles.

Once known simply as the mare nostrum—our sea—“the Mediterranean” is a theme that has received in the last few decades seemingly endless attention, generating a rich, complex and varied bibliography in many languages. The Mediterranean Sea is, etymologically, “the sea between lands,” a body of relatively navigable waters surrounded by the shores of three continents—Europe, Asia and Africa. “The Mediterranean,” however, has increasingly in the modern and contemporary era been perceived as a highly fluid, fluctuating, multiple, poly-linguistic and hybrid area of multiple interactions, exchanges and violent conflicts, or, as suggested by Iain Chambers “an intricate site of encounters and currents.”

In Franco Cassano’s Pensiero Meridiano (Southern Mediterranean Thought), Ulysses—the eternal wanderer who must continue to leave even as he dreams of going home to Ithaca—is still today the enduring archetype of what Cassano calls “Mediterranean Man”: “What makes Ulysses great […] is the ability to house within himself this wandering and at the same time the desire to return.” But what about “Mediterranean Woman”?

This presentation argues that some contemporary women writers, poets, critics and philosophers, including Adriana Cavarero, Toni Maraini, Caterina Resta, Francesca Saffioti and Bianca Tarozzi, use the Italian idiom to write about the Mediterranean in a different way. This new approach to the Mediterranean may be defined as a creative and critical expansion and revision of the myth and semantic possibilities of the figure of Penelope, seen in contrast and opposition to the figure of Ulysses—archetypal Mediterranean hero, defiant explorer, and consummate yet deceitful storyteller. These women in fact use writing itself to resist and oppose the deceptions of patriarchal norms and limits, and to imagine new and different cartographies of the postcolonial Mediterranean.

Lucia Re (Ph.D. in Comparative Literature, Yale University) is Professor of Italian with an appointment also in the UCLA Department of Gender Studies. Her principal fields of study and teaching are modern and contemporary literature and culture. Her interests include poetry and the novel, women writers and artists, feminist theory, futurism and the avant-garde, Italy and the Mediterranean, race studies, and literary translation. Her book Calvino and the Age of Neorealism won the 1992 Marraro Prize of the Modern Language Association. For the edition of Amelia Rosselli’s volume of poetry, War Variations (translated with Paul Vangelisti), she was awarded the 2006 PEN USA literary translation award, as well as the Flaiano Prize for International Italian Studies. Prof. Re has published more than eighty scholarly articles and essays on authors ranging from Gabriele d’Annunzio to Anna Maria Ortese. She is currently working on a scholarly article entitled “Immigrant Writing and the Power of Fear,” about the novels of the Algerian-Italian author Amara Lakhous.

The talk will be followed by a reception in Eck Center atrium just outside the lecture hall to which all are invited.