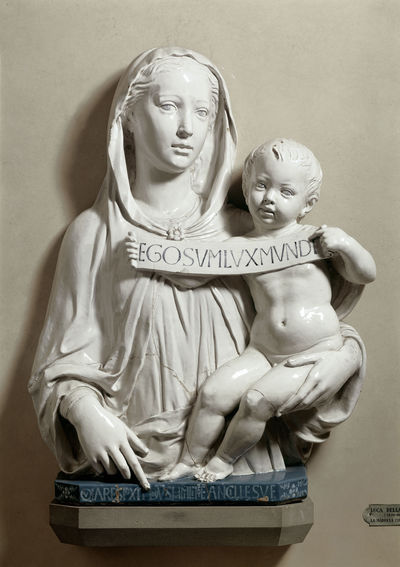 When he was about forty years old, sometime around 1441, Florentine artist Luca della Robbia (1399/1400-82) began to work in a new medium of his own invention: large tin-glazed terracotta sculpture. Shiny and colorful, this novel art was instantly popular and would be used by artists in the Della Robbia and, later, Buglioni families for nearly a century. Luca often glazed the flesh, hair, and clothing of his figures entirely white and, in recent decades, scholars have understood the color and reflectivity of this glaze to express, in an ideal fashion, the purity and holy resplendence of Christ, the Virgin, and the saints. Yet the sensitivity of such glazes to real lighting conditions has not received a detailed analysis in the literature on Luca or his artistic heirs. Thus this talk examines the meaningful relationship between the artist’s distinctive white-glazed figures and ambient light, focusing on Luca’s Madonna and Child at the Museo degli Innocenti, Florence, which identifies Christ as the “light of the world.”

Catherine Kupiec specializes in Italian art of the fourteenth to sixteenth centuries, with a focus on sculpture and its materials. Her current book project examines the novel medium of glazed terracotta sculpture developed by the Florentine artist Luca della Robbia in the 1430s. Interested in the qualities of color, light, and space in sculpture, as well as the relationship between artistic practice and knowledge as embodied in recipe books and treatises, her recent research has involved hands-on work with clay modeling, glazing, and firing.

Before coming to Notre Dame, Catherine was a visiting professor at the Pennsylvania State University and taught art history and writing courses at Rutgers University. She is the recipient of a Fulbright Fellowship to Florence and in 2015 contributed to research for the first major Della Robbia exhibition in the United States, “Della Robbia: Sculpting with Color in Renaissance Florence” (Boston and Washington, D.C., 2016-2017). Her essay on the relationship between light and glazed sculpture will appear in an upcoming edited volume.