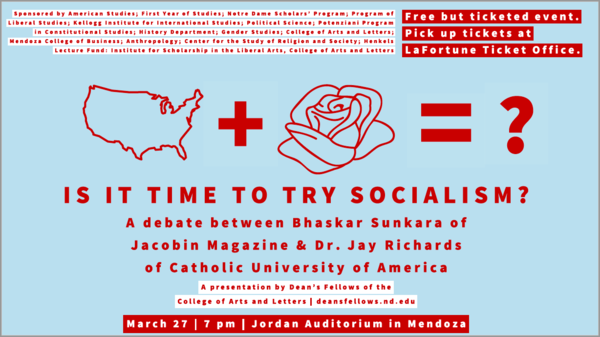 Bhaskar Sunkara of Jacobin and Jay Richards, professor at The Catholic University of America, debate the merits of socialism.

Event begins at 7:00 pm in the Jordan Auditorium at the Mendoza College of Business.

Free but ticketed event: https://deansfellows.nd.edu/greenfield/
*pick up tickets at the LaFortune ticket office

Bhaskar Sunkara is the founding editor of Jacobin.  He attended George Washington University, where he got the idea for the publication. Sunkara writes for Vice magazine, The New York Times, Washington Post and The Nation, among other outlets. He has appeared on the PBS Tavis Smiley program, MSNBC’s “Up with Chris Hayes,” The Michael Brooks Show and the FX show “Totally Biased with W. Kamau Bell.”

Jay Richards is an Research Assistant Professor in the Busch School of Business at The Catholic University of America, a Senior Fellow at the Discovery Institute, and executive editor of The Stream. In recent years he has been Distinguished Fellow at the Institute for Faith, Work & Economics, Contributing Editor of The American at the American Enterprise Institute, a Visiting Fellow at the Heritage Foundation, and Research Fellow and Director of Acton Media at the Acton Institute. A prolific writer, his articles range in topic from culture, economics, and public policy to natural science, technology, and the environment. He is also creator and executive producer of several documentaries. An experienced public speaker and lecturer, Richards has appeared on several hundred radio and television programs. His most recent book, co-authored with Jonathan Witt, is The Hobbit Party: The Vision of Freedom that J.R.R. Tolkien Got and the West Forgot.