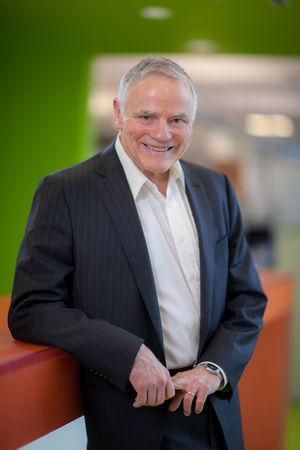 Dr. Leroy E. Hood graduated from the Johns Hopkins University School of Medicine in 1964 with an MD and from Caltech with a PhD in biochemistry in 1968. After three years as a senior investigator at NIH, his academic career began at Caltech, where he and his colleagues developed the DNA gene sequencer and synthesizer, and the protein synthesizer and sequencer–four instruments that paved the way for the successful mapping and understanding of the human genome. A pillar in the biotechnology field, Dr. Hood has played a role in founding fifteen biotechnology companies including Amgen, Applied Biosystems, Integrated Diagnostics and Arivale. He is a member of the National Academy of Sciences, the National Academy of Engineering, and the Institute of Medicine. Of the more than 6,000 scientists world-wide who belong to one or more of these academies, Dr. Hood is one of only fifteen people nominated to all three.

Dr. Hood has co-authored numerous textbooks in biochemistry, immunology, molecular biology and genetics, as well as a popular book on the human genome project, "The Code of Codes" and he is just finishing up a text on systems biology. He is the recipient of numerous national and international awards, including the Lasker Award for Studies of Immune Diversity (1987), the Kyoto Prize in advanced technology (2002), the Heinz Award for pioneering work in Systems Biology (2006), and the coveted NAE 2011 Fritz J. and Delores H. Russ Prize for developing automated DNA sequencing. In addition to having received 17 honorary degrees from prestigious universities in the U.S. and abroad, Dr. Hood has published over 750 peer-reviewed articles and currently holds 36 patents. In 2013, he received the National Medal of Science from President Obama. Hood has been named by The Best Schools as one of the 50 Most Influential Scientists in the World Today (2014) http://isb.io/top50. Scientific American has named Hood as one of the top 6 in their selection of 100 biotech visionaries world-wide (2015) http://isb.io/visionary.