Starting at the Annenberg Auditorium in the Snite Museum of Art and ending at the Grotto. Join the Center for Italian Studies for its annual Dante Now! event, dedicated to performing and understanding Dante’s Divine Comedy. This year Professor Christian Moevs will kick off the event with an illustrated public talk that will be broadcast live to participants at Notre Dame’s Global Gateway in Rome. 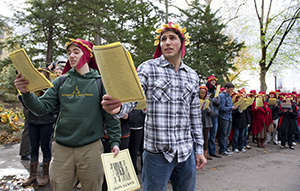 The lecture that gave rise to Dante Now was given over a decade ago and it has been a Game Day event since 2012. For more on Dante Now, see this article published in the Observer on Friday, September 29, 2017, or have a look at the video of the inaugural performance in 2012.

Dante Now!
A Celebration of Dante and the Divine Comedy in Performance

2:30pm
Simultaneous public readings from Dante’s Divine Comedy
All across campus on the way to the Grotto

2:50pm
Choral reading of Saint Bernard in Paradise praying to the Virgin
The Grotto

Sponsored by the Devers Family Program in Dante Studies and the Center for Italian Studies.