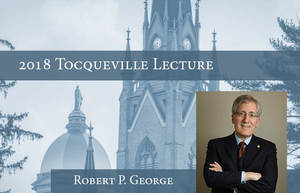 “Citizenship, Virtue, and the Constitution: Protecting Liberty and Preventing Tyranny” was delivered by Robert P. George, the McCormick Professor of Jurisprudence and Director of the James Madison Program in American Ideals and Institutions at Princeton University.

George has served as chairman of the U.S. Commission on International Religious Freedom and as a presidential appointee to the U.S. Commission on Civil Rights. He has also served on the President’s Council on Bioethics and as the U.S. member of UNESCO’s World Commission on the Ethics of Science and Technology. George is also a visiting professor at Harvard Law School. His most recent book is “Conscience and Its Enemies” (ISI Books). George recently received a Leadership Award from the Heterodox Academy.

The Tocqueville Program at Notre Dame fosters the study of the role of religion in America’s constitutional republic. Through public lectures, debates, conferences and fellowships, the Tocqueville Program seeks to nurture informed conversation, learning and scholarship about the fundamental principles of a decent and just political regime with a particular focus on religious liberty.

For interview inquiries, contact Professor Phillip Muñoz, director of the Tocqueville Program, at 574-631-0489 or vmunoz@nd.edu.

More information on this and other events hosted by the Tocqueville Program can be found at tocqueville.nd.edu.