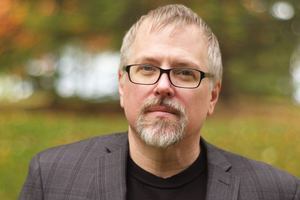 Jeff VanderMeer is the 2016-2017 Trias Writer-in-Residence for Hobart-William Smith College. His most recent fiction is the NYT-bestselling Southern Reach trilogy (Annihilation, Authority, and Acceptance), which won the Shirley Jackson Award and Nebula Award. The trilogy made over 30 year’s best lists, including Entertainment Weekly’s top 10, and prompted the New Yorker to call the author “the weird Thoreau.” The trilogy has been acquired by publishers in 28 other countries, with Paramount Pictures acquiring the movie rights. VanderMeer’s nonfiction has appeared in the New York Times, the Guardian, the Washington Post, the Atlantic.com, and the Los Angeles Times. He has taught at the Yale Writers’ Conference and the Miami International Book Fair and lectured at MIT, Brown, and the Library of Congress. His forthcoming novel from Farrar, Straus and Giroux is titled Borne. He lives in Tallahassee, Florida, with his wife, the noted editor Ann VanderMeer.

A three-time World Fantasy Award winner and 15-time nominee, VanderMeer  serves as the co-director of Shared Worlds, a unique teen SF/fantasy writing camp located at Wofford College and now entering its tenth year. Previous novels include the Ambergris Cycle, with nonfiction titles including Wonderbook, Booklife, and The Steampunk Bible. Widely regarded as one of the world’s best fantasists, Jeff VanderMeer grew up in the Fiji Islands and spent six months traveling through Asia, Africa, and Europe before returning to the United States. These travels have deeply influenced his fiction. He is the recipient of an NEA-funded Florida Individual Artist Fellowship for excellence in fiction and a Florida Artist Enhancement Grant.

His wife Ann VanderMeer was the fiction editor for Weird Tales for five years and won the Hugo for her work there. She now serves as an acquiring editor for Tor.com. She is also an award-winning publisher, and co-editor with Jeff on Best American Fantasy 1 and 2, Fast Ships, Black Sails (pirates), Steampunk 1 and 2, New Weird, The Weird, The Thackery T. Lambshead Cabinet of Curiosities, The Time Traveler’s Almanac, and many more. Together, they have taught writing workshops and given lectures all over the world. This literary “power couple” (Boing Boing) has been profiled on Wired.com, NYT blog, and on national NPR.

Ann and Jeff live in Tallahassee, Florida, with two cats.

“Jeff VanderMeer’s Southern Reach Trilogy was an ever-creeping map of the apocalypse; with Borne he continues his investigation into the malevolent grace of the world, and it’s a thorough marvel.” —Colson Whitehead

“VanderMeer is that rare novelist who turns to nonhumans not to make them approximate us as much as possible but to make such approximation impossible. All of this is magnified a hundredfold in Borne . . . Here is the story about biotech that VanderMeer wants to tell, a vision of the nonhuman not as one fixed thing, one fixed destiny, but as either peaceful or catastrophic, by our side or out on a rampage as our behavior dictates—for these are our children, born of us and now to be borne in whatever shape or mess we have created. This coming-of-age story signals that eco-fiction has come of age as well: wilder, more reckless and more breathtaking than previously thought, a wager and a promise that what emerges from the twenty-first century will be as good as any from the twentieth, or the nineteenth.” —Wai Chee Dimock, The New York Times Book Review

“The conceptual elements in VanderMeer’s fiction are so striking that the firmness with which he cinches them to his characters’ lives is often overlooked . . . Borne is VanderMeer’s trans-species rumination on the theme of parenting . . . [Borne] insists that to live in an age of gods and sorcerers is to know that you, a mere person, might be crushed by indifferent forces at a moment’s notice, then quickly forgotten. And that the best thing about human nature might just be its unwillingness to surrender to the worst side of itself.” —Laura Miller, The New Yorker

“Borne, the latest novel from New Weird author Jeff VanderMeer, is a story of loving self-sacrifice, hallucinatory beauty, and poisonous trust . . . Heady delights only add to the engrossing richness of Borne. The main attraction is a tale of mothers and monsters—and of how we make each other with our love.” —Nisi Shawl, The Washington Post

“Borne, Jeff VanderMeer’s lyrical and harrowing new novel, may be the most beautifully written, and believable, post-apocalyptic tale in recent memory . . . [VanderMeer] outdoes himself in this visionary novel shimmering with as much inventiveness and deliriously unlikely, post-human optimism as Borne himself.” —Elizabeth Hand, Los Angeles Times

“A triumph of science fiction . . . Borne will dazzle you with its wonders and horrors, revealing itself as another piece of the puzzle, a reflection on the terror and beauty of being alive.”  —Matt E. Lewis, Electric Literature

“Just as VanderMeer subverted your expectations for each sequel to Annihilation, with Borne he’s written something completely different and unpredictable — not just in terms of the story, but also with regards to language, structure, and point of view.”  —Adam Morgan, Chicago Review of Books

The reading is free and open to the public.

Co-sponsored by: Institute for Scholarship in the Liberal Arts, College of Arts & Letters, English Department, Minor in Sustainability, and the William P. & Hazel B. White Endowed Chair, English