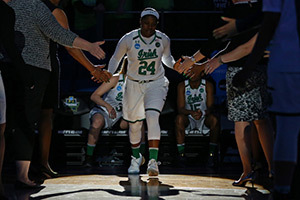 For the 23th straight year and 25th time overall, the University of Notre Dame women's basketball team is dancing in the NCAA Championship. The Irish were named a No. 1 seed in the Spokane Regional and will host First & Second Round action inside Purcell Pavilion starting on Friday, March 16, at 5 p.m. ET.

The Irish received a No. 1 seed for the seventh consecutive year and eighth time in program history. Notre Dame is 30-6 all-time as a top seed. In addition, Notre Dame received First & Second Round hosting duties for the 13th time, where they are 18-2 in NCAA play inside Purcell Pavilion, including the winners of 12 straight.

To continue the winning streak at home, the Irish will first battle CSUN at 5 p.m. on ESPN2. The Matadors went 19-15 overall and won the Big West Tournament after upsetting No. 1 seed UC Davis.

The nightcap of Friday's First Round doubleheader will feature No. 8 seed South Dakota State clash with No. 9 seed Villanova at 7:30 p.m. on ESPN2. The Jackrabbits of South Dakota State are making their eighth NCAA Tournament appearance after going 26-6 and winning the Summit League Championship. Meanwhile, Villanova is making its 11th NCAA appearance and first since 2013 after going 22-8 overall and 12-6 in the Big East.

As a conference, eight ACC teams made the Big Dance, which tied the league record set in both 2014 and 2015. The eight teams were the most of any conference this year.

All-session and single-session tickets for this weekend's NCAA Championship games are on sale now at UND.com/buytickets. Tickets are also available by phone (574-631-7356) or in person at the Murnane Family Athletics Ticket Office (Gate 9 at Purcell Pavilion) beginning at 8:30 a.m. Tuesday.

Lastly, Notre Dame Women's Basketball will host an autograph session and ticket pickup event in the main lobby of Purcell Pavilion on Tuesday from 11:30 a.m.-12:30 p.m. Fans can pick up their NCAA tickets, meet the team and enjoy FREE pizza!