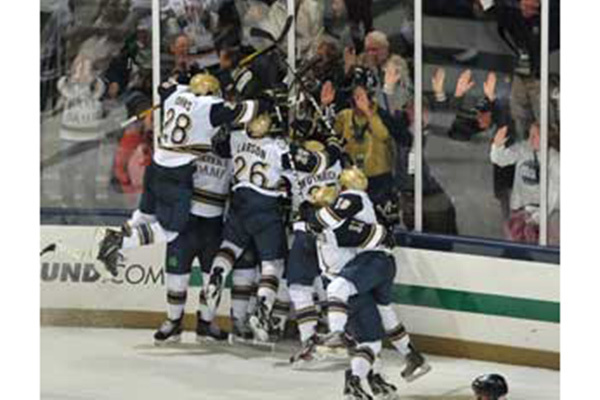 The No. 4/5 Notre Dame hockey team will play host to a Big Ten Tournament semifinal game against No. 13/15 Penn State at 5:30 p.m. on Saturday, March 10 at the Compton Family Ice Arena. The game will be televised on ESPNU.

Each opening round series of the 2018 Big Ten Tournament ended in sweeps on Saturday night (March 3), including No. 4 seed Penn State posting back-to-back home wins over No. 5 seed Minnesota by scores of 5-3 and 6-5.

The Irish posted a 3-0-1-1 (shootout win) record in four games against Penn State this season. In a home series on Nov. 10-11, Notre Dame skated to wins of 5-3 and 1-0. The Irish then took game one of the teams’ road series by a score of 5-3 on Feb. 2. The following night in game two, after playing to a 2-2 tie, Jordan Gross netted the shootout winner for the additional point in the Big Ten standings.

Tickets for Saturday’s Big Ten Tournament semifinal game are available here. Fans will receive a white rally towel at the game and tickets are still available due to the University’s spring break schedule.

The Irish earned a home semifinal game by winning the 2017-18 Big Ten regular season championship after posting a 17-6-1-1 record.

Evans, Gross and sophomore goaltender Cale Morris are also on the fan ballot for the 2018 Hobey Baker Award. Gross, who has skated in all 153 games of his Irish career, has seven goals and 17 assists for 24 points on the season. Morris has been a stalwart in the Notre Dame net, posting a 22-7-1 record to go along with a .945 save percentage and a 1.92 goals against average. To vote for the Hobey hopefuls, who are also All-American candidates, click here.