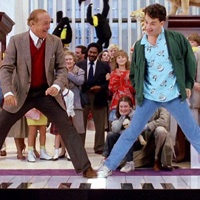 The late-80’s saw a slew of Freaky-Friday-but-with-dudes films, including Like Father Like Son (1987), Vice Versa (1988), and 18 Again! (1988). While those films were largely dismissed, Big (1988) hit at the same time and managed not to be clumped together with those clunkers, earning two Oscar nominations and making its budget back nearly tenfold. Unlike the previously mentioned body-switch movies, Big keeps it internal as 12-year-old Josh (David Moscow) alone magically ages after longing to be “big” and becomes 30-year-old Josh (Tom Hanks) overnight. Heading to New York City, the suddenly-aged Josh manages to secure employment and does his best to juggle the difficulties a career and romance throws his way while gaining an appreciation for childhood’s carefreeness.