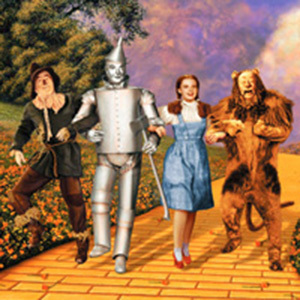 While not initially a major financial success due to its large budget, The Wizard of Oz was a critical and cultural sensation when released in 1939 (losing the Best Picture Oscar to similarly-popular Gone with the Wind). Its multi-generational nostalgia solidified with its annual holiday telecasts, first on CBS and later NBC, where Dorothy (Judy Garland) became iconic and her journey well-known: a tornado hits her native Kansas and sends her and her little dog, too, to Oz. Once there, she befriends a brainless Scarecrow (Ray Bolger), a heartless Tin Man (Jack Haley), and a spineless Lion (Bert Lahr). The four follow the yellow brick road to meet the eponymous Wizard while battling the Wicked Witch of the West (née Elphaba).

Co-presented with La Casa de Amistad and the South Bend Civic Theatre, which will be performing the stage version July 14–30.

Sponsored by the Meg and John P. Brogan Endowment for Classic Cinema.