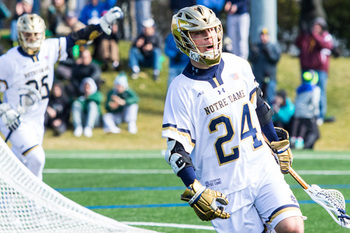 Notre Dame earned the No. 4 national seed and will play host to Marquette (8-7) in the first round of the 2017 NCAA Men's Lacrosse Championship.

The game is scheduled for noon ET at Arlotta Stadium and it will be telecast live on ESPNU.

Notre Dame (8-5) made it to the Atlantic Coast Conference tournament title game by defeating Duke in the semifinal before falling to North Carolina. Marquette won the Big East title by defeating Denver and Providence in their tournament run.

The Irish and Golden Eagles met earlier this season, with Notre Dame claiming an 11-10 victory at Arlotta Stadium on April 11.

The winner of Notre Dame's first-round contest against Marquette will take on the winner of the first-round tilt between No. 5 seed Denver and Air Force in the quarterfinals May 20 in Hempstead, New York.