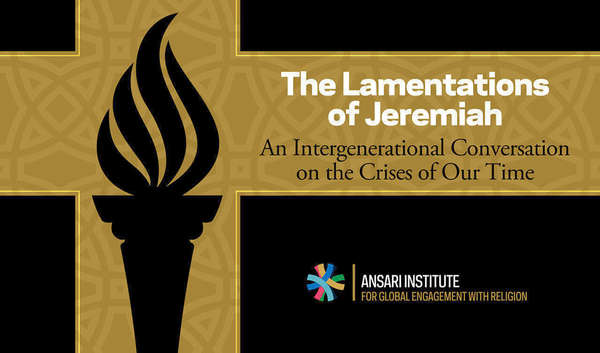 In honor of Black History Month, join Rev. Jeremiah A. Wright Jr., an outspoken civil rights advocate, and Minister Tiauna Boyd Webb, one of the first Wright scholars to graduate from Chicago Theological Seminary, for an intergenerational conversation on building a more just and peaceful world.

Renowned for his exuberant oratory, Rev. Wright is a master of the jeremiad, a type of sermon that speaks truth to power by invoking biblical prophecy, offering a diagnosis of our fallen condition, and issuing a call to repentance. In 2008, his sermons were caricatured by media outlets thanks to sound-bite journalism, but “Jeremiah’s jeremiads” resonate with many as prophetic.

A former Wright Scholar, Minister Tiauna Boyd Webb is a young leader in the Samuel DeWitt Proctor Conference, a recognized NGO of the United Nations that seeks to strengthen the individual and collective capacity of thought leaders and activists in the church, academy, and community through education, advocacy, and activism for human rights and social justice.

Today, our world faces multiple intersecting crises: racial injustice (coupled with white supremacy and violent extremism), economic inequality, climate change, and a global pandemic. Given these vast challenges, what can a prophetic faith tradition teach us about building a better world? Join the Ansari Institute for Global Engagement with Religion for a wide-ranging conversation with Rev. Wright and Minister Webb as the struggle for peace and justice passes from one generation to another.

This event is presented by the University of Notre Dame's Ansari Institute for Global Engagement with Religion and co-sponsored by the University's African Student Association (ASA), Department of American Studies, and Klau Center for Civil and Human Rights, as well as Indiana University South Bend's Civil Rights Heritage Center and the United Religious Community of St. Joseph County.

Rev. Jeremiah A. Wright Jr.
Rev. Jeremiah A. Wright Jr. is pastor emeritus of Trinity United Church of Christ in Chicago. During his 36 years as Trinity’s pastor, he helped it grow from a small congregation to the largest church in the United Church of Christ denomination. As former pastor to Barack Obama and a graduate of Howard University (the alma mater of Kamala Harris), Rev. Wright is connected to two historic firsts for African Americans. He earned a Master of Arts in the History of Religions from the University of Chicago Divinity School, a Doctor of Ministry from the United Theological Seminary in Dayton, Ohio, and has received multiple honorary doctorates. Previously, Rev. Wright served in the United States Marine Corps and as a medical technician in the United States Navy, where a special duty assignment earned him a letter of appreciation from the White House physician for his care of President Lyndon Johnson. Read Detailed Bio >

Minister Tiauna Boyd Webb
Minister Tiauna Boyd Webb serves as director of missions and programs for the Samuel DeWitt Proctor Conference (SDPC), a Chicago-based NGO that mobilizes the African American faith community to address human rights and social justice at the local, national, and global levels. Previously, she served as a Peace Corps volunteer in Ghana and graduated with a Master of Divinity degree from the Chicago Theological Seminary. In her current role, Webb helps the SDPC to continue the faith community’s tradition of engaging with important human rights issues.

Charles Powell
Charles W. Powell, a practical theologian, earned his Ecumenical Doctor of Ministry degree at Catholic Theological Union in Chicago. He specializes in interreligious dialogue between Christians and Muslims. Powell travels extensively throughout the Middle East and Europe engaging in conversations with Muslim scholars and practitioners of Islam in order to have a deeper understanding and appreciation of the Islamic milieu. He is a visiting fellow at the Oxford Centre for Islamic Studies at the University of Oxford in the UK. In addition, Powell serves as an adjunct professor of Muslim-Christian Dialogue at Holy Cross College and is an affiliated faculty member with the Ansari Institute.