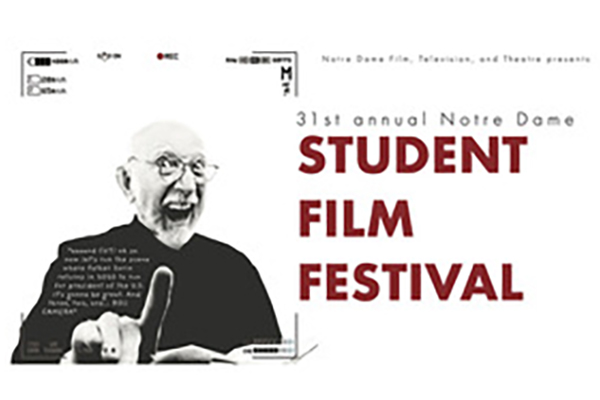 An annual launching pad for student filmmakers as they begin their careers in the film, television, and entertainment industries, the Notre Dame Student Film Festival screens films that were made by undergraduate students during the past year as class projects in the Department of Film, Television, and Theatre. As in recent years, after each screening audience members will be invited to vote for their favorite film via text message. The Audience Choice Award will be presented to the student director(s) of the winning film after the final screening.

The festival has featured the first films of future award-winning filmmakers such as Peter Richardson (2011 Sundance Film Festival Grand Jury Award winner, How To Die in Oregon) and John Hibey (2012 Sundance Film Jury Award Winner for Short Filmmaking, Fishing Without Nets), as well as numerous others. It has served as the springboard for successful careers in every aspect of the industry, where ND Student Film Festival alumni have worked on everything from Saturday Night Live to La La Land.

Many films from past festivals have also been selected for national and international film festivals, including:

Among the films featured in the 2020 Notre Dame Student Film Festival:

Sand Branch
Kelli Smith, Bella Martinez
Just outside of Dallas, there’s a small community with no access to clean water, and no shortage of love.

Don’t Be Afraid to F*** Up
Gretchen Hopkirk
Finding your place in college is a funny thing for a close-knit group of Notre Dame students who just make it up as they go.

Regular Poor Asian
Kenny Xu
Growing up Asian American in the Midwest means following the expectations of a majority white culture…or does it?

Sam and Peter Throw a Killer Party
Zach Lawson, Kenny Xu, Dan Docimo
The best costume at a Halloween party might not be a costume at all.

*Audience Choice Award will be presented after the 7:00 pm screening on Sunday, January 26.