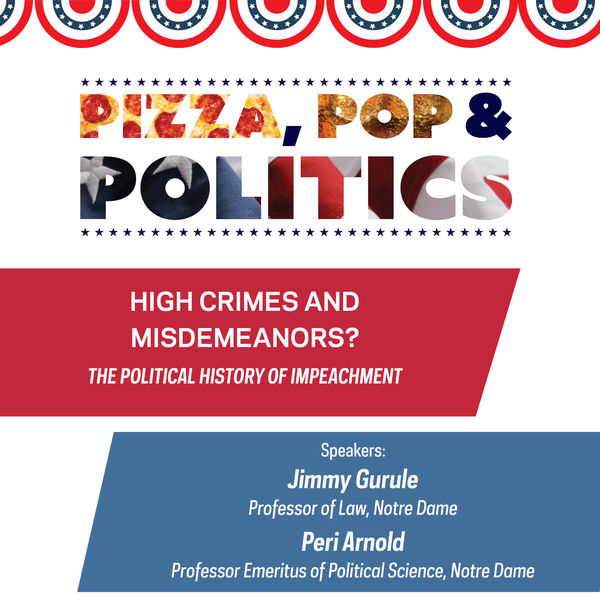 December’s Pizza, Pop, and Politics will feature Jimmy Gurulé, Notre Dame professor of law, and Peri Arnold, professor emeritus of political science. The Notre Dame community is encouraged to join in a discussion on the history of impeachment. This event is cosponsored by the Center for Social Concerns, ND Votes, Constitutional Studies, and the Rooney Center for the Study of American Democracy.

Jimmy Gurulé is an expert in the field of criminal law, international criminal law, terrorism and terrorist financing, and national security law. He has worked in a variety of high–profile public law enforcement positions including those in the U.S. Department of the Treasury, U.S. Department of Justice, and U.S. Customs Service. Among his many successes in law enforcement, Gurulé was instrumental in developing and implementing the U.S. Treasury Department’s global strategy to combat terrorist financing.

Peri Arnold, joined the Department of Government in 1971 and has served as its chair and also as director of the Hesburgh Program in Public Service. He is a scholar of American politics and the presidency. He has authored two books, Making the Managerial Presidency and Remaking the Presidency, as well as numerous articles and chapters. Arnold is an elected fellow of the National Academy of Public Administration.