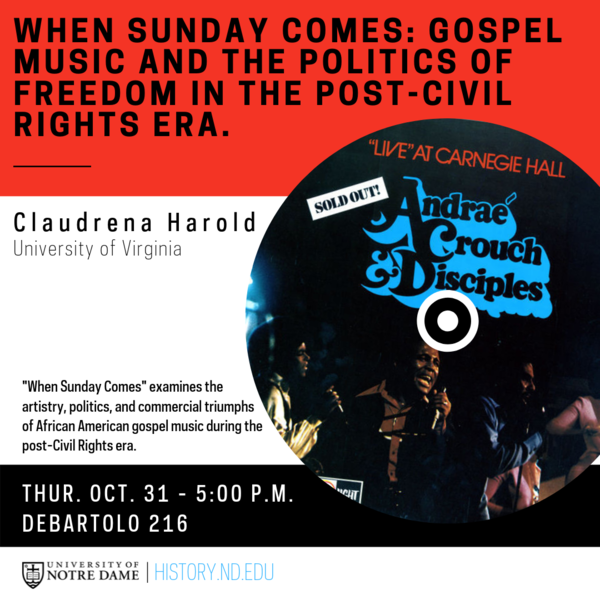 “When Sunday Comes” examines the artistry, politics, and commercial triumphs of African American gospel music during the post-Civil Rights era.

It contextualizes gospel music’s creative shifts, sonic innovations, theological tensions, and political assertions within the larger framework of the socioeconomic and cultural transformations taking place in black America. This talk will engage four principal questions: What were the major sonic transformations in gospel music between 1968 and 1994, and to what extent were those transformations reflective of creative shifts within other forms of black popular music, particularly R&B, funk, hip-hop, and jazz? In what ways were gospel artists shaped by larger political developments in the United States, i.e., the rise and fall of the Black Power Movement as well as the emergence and growing power of the Christian Right/Moral Majority? How and to what degree were the soundscapes of African American gospel music reflective of regional dynamics? And lastly, did the end of legal segregation alter the relationship between African American gospel artists and the predominantly white Contemporary Christian Music (CCM) industry?