In 2015, over a million migrants and asylum-seekers arrived in Europe, leading to a crisis in the international refugee system, to soaring tensions within the European Union and to the rise of hardline anti-immigrant parties in almost all European countries.  Europe now struggles to reconcile its liberal democratic values with political pressures to stem the flow of immigrants and asylum-seekers.  European refugee policies are not merely debated in the halls of power in Brussels, Berlin and Rome.  They have real human consequences as evidenced by the thousands of deaths in the Mediterranean Sea in the past few years.  This presentation will explore the pressures, contradictions and potential consequences of European policies toward those arriving on its borders in search of safety. 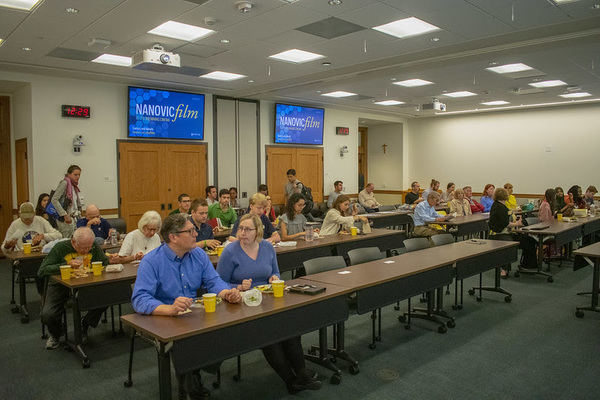 Elizabeth Ferris is Research Professor with the Institute for the Study of International Migration at Georgetown University’s School of Foreign Service and an adjunct professor in the Georgetown Law School.  From January-September 2016, she also served as Senior Advisor to the UN General Assembly’s Summit for Refugees and Migrants in New York.

From 2006-2015, she was a Senior Fellow and co-director of the Brookings-LSE Project on Internal Displacement where she worked to support understanding and protection of internally displaced persons.  Prior to joining Brookings, she spent 20 years working in the field of humanitarian assistance, most recently in Geneva, Switzerland at the World Council of Churches.  She has also served as the director of the Church World Service’s Immigration and Refugee Program, as research director for the Life & Peace Institute in Uppsala, Sweden and as a Fulbright professor at the Universidad Autónoma de México.  Her teaching experience has included positions at Lafayette College, Miami University and Pembroke State University.  She has written extensively on refugee, migration and humanitarian issues, including The Politics of Protection: The Limits of Humanitarian Action (Brookings Institution Press, 2011), Consequences of Chaos: Syria’s Humanitarian Crisis and the Failure to Protect, with Kemal Kirsici (Brookings Institution Press, 2016).  Her latest book, Refugees, Migration and Global Governance: Negotiating the Global Compacts, with Katharine Donato, was published by Routledge in 2019.  She received her BA degree from Duke University and her MA and PhD degrees from the University of Florida.

The lecture is free and open to the public.  Lunch is available on a first-come, first-served basis.