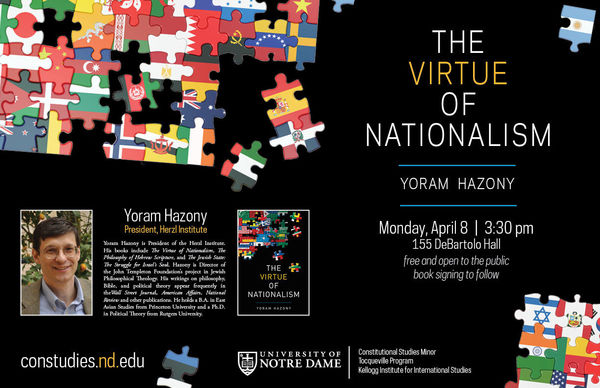 Yarom Hazony will be speaking on his recent book, The Virtue of Nationalism.

Hazony is president of The Herzl Institute in Jerusalem. He founded The Shalem Center in Jerusalem in 1994, and led it through its accreditation in 2013 as Shalem College, Israel’s first liberal arts college. He received his B.A. from Princeton University in East Asian Studies in 1986, and his Ph.D. in Political Philosophy from Rutgers University in 1993.

More on The Virtue of Nationalism: Excerpt

“Hazony masterfully blends a deep grasp of history, political philosophy, theology, and common sense with originality and clarity in what will be one of the most-discussed books of this dawning new age of the nation.” – Patrick Deneen, University of Notre Dame

“Hazony has written a magnificent affirmation of democratic nationalism and sovereignty. The book is a tour de force that has the potential to significantly shape the debate between the supporters of supranational globalism and those of national-state democracy.” – John Fonte, Hudson Institute

“In this engaging and deeply learned book, Yoram Hazony explores the religious and historical roots of nationalism, illuminates its modern accomplishments, and thereby offers a uniquely insightful guide to the forces transforming the politics of the West.” – Yuval Levin, National Affairs