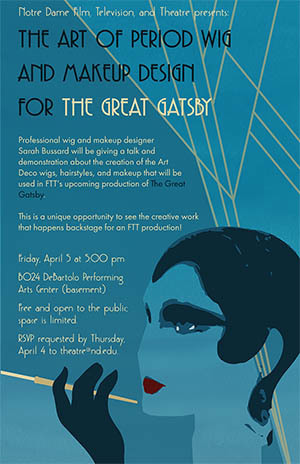 Professional wig and makeup designer Sarah Bussard will be creating the iconic hairstyles and makeup for FTT’s upcoming production of The Great Gatsby (April 10-14 at the DeBartolo Performing Arts Center). She will give a talk and demonstration about the creation of the Art Deco wigs, hairstyles, and makeup that will be used in our production. This is a unique opportunity to see the creative work that happens backstage for an FTT show.

Free and open to the public; space is limited. RSVP requested by Thursday, April 4.  RSVP here or email theatre@nd.edu.

She received her M.F.A. in Makeup and Wig Design and Production at the University of Cincinnati, from the College-Conservatory of Music (CCM) where she studied wig making and design, and her B.A. in Liberal Studies (concentrations in Theatre, Literature, and Writing) from Bethel College in Mishawaka, Indiana.

She served as Theatre Design and Production Faculty from 2012-2016 at East Texas Baptist University in Marshall, Texas, where she supervised student designers and technicians, managed the costume and makeup shop, and taught a variety of courses including design and production. She regularly guest lectures and teaches workshops in costume/makeup/wig design, history, and production.