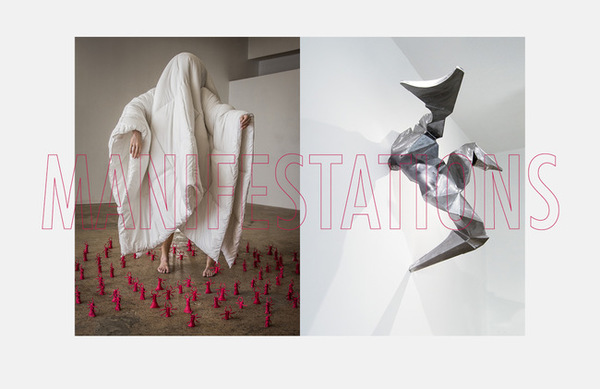 Please join us for an artist lecture by Emily Elliott on March 1 at 5 P.M. in room 215, Riley Hall, followed by the Manifestations exhibition opening reception in the hallway across from the AAHD Gallery. The Manifestations exhibition features artwork by Emily Elliot and Eric W. Stephenson. Refreshments will be served. The lecture and reception are free and open to the public. The exhibition will run from Feb. 28-March 22.

Emily Elliott was born and raised in Columbus, Georgia. There she attended Columbus State University where she received her Bachelors in Fine Art in 2011, she then relocated to Tampa, Florida where she received her Master’s in Fine Art at the University of South Florida in 2014. Upon graduating, she moved to Brooklyn New York to continue her education by working as studio assistant and fabricator. During this time she fell in love with the multi-layered process of mold making, techniques which she applied as a professional mold maker later in Long Island City as well as in her own art practice. She has since relocated to Saint Louis, MO, following her passion for making art and teaching sculpture and three-dimensional design. Using casting materials and techniques as metaphors for society and the individual, her work poses questions about the seen and the unseen and the nature of viewing bodies. Elliott’s evocative works blur the designations of the body and mind, while implicating the fIgure as both victim and perpetrator. Her work has been exhibited in Saint Louis, Columbus, Tampa, and Miami at the 2017 Satellite Art show.

Eric W. Stephenson is an American sculptor based in Chicago whose work explores the form, spirit, and experience of the body, human and otherwise, rendered through abstraction and informed by industrial materials and methods. One such trajectory of work focused on the earthly remnants of insects and plants, another on commemorative containers for the human spirit.  His most recent work returns to the human form to figure a language of movement through a mastery of metal.

Stephenson has taught at the University of Houston, Rhode Island College, and the Art Institute of Chicago, and has taught workshops at the University of Kentucky, Humboldt State University, and multiple International Sculpture Conferences, among others.  His work has been shown at Fusion MIA during Art Basel Miami, the Elmhurst Museum, N’namdi Gallery, the Koehnline Museum, Grounds for Sculpture, and the Frederick Meijer Sculpture Garden, among others. Stephenson’s work is found in numerous private and public collections, including Miller Electric in Appleton, Wisconsin, from whom he won the First Biennial Miller Sculpture Exhibition Purchase Prize, the Elmhurst Museum, the Village of Oak Park, and Delta College in Midland, Michigan. Stephenson received his BFA from the Pennsylvania State University and MFA from the University of Houston, and in 2014 completed a SIM Residency in Reykjavik, Iceland