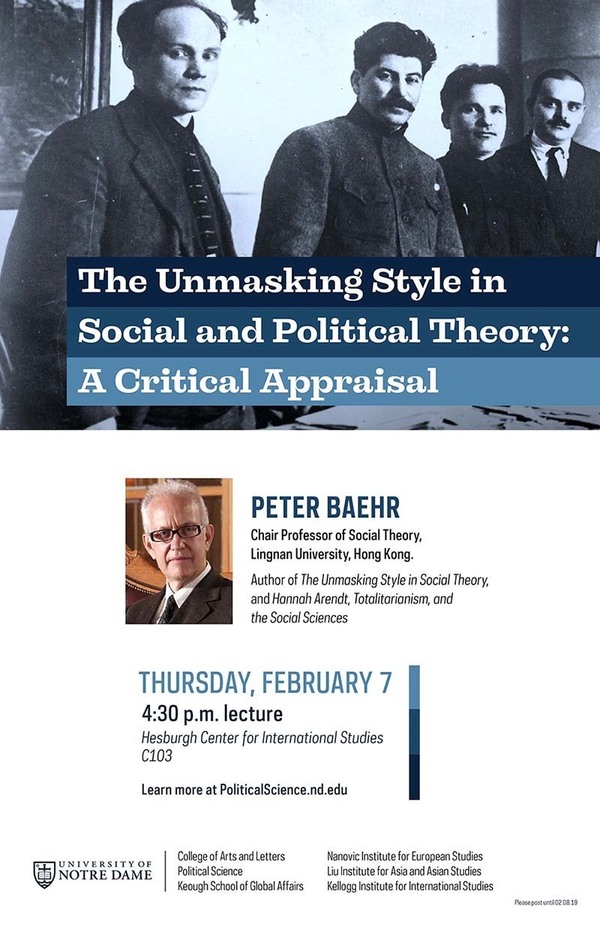 Co-sponsored by the Department of Political Science, College of Arts and Letters, Keough School, and the Nanovic, Kellogg and Liu Institutes.

Abstract
This talk examines a destructive, though common, form of social criticism. I call it unmasking. Unmasking is not the same as scientific refutation or principled disagreement. When people unmask they claim to rip off a disguise, revealing the true beneath the feigned or imaginary. Two kinds of unmasking are prominent in western societies. The first, aimed at persons or groups, claims to expose enmity and hypocrisy. The second, aimed at ideas, claims to expose illusions and ideologies.
The talk describes the techniques of unmasking practiced by intellectuals and revolutionary social movements. It contrasts the peculiarities of unmasking in vernacular and academic contexts. And it discusses the  contribution of social and political theory to unmasking. I will suggest that unmasking is a style of thought harmful both to political argument and to sociological theory. It should and can be avoided.

Bio:
Peter Baehr is Research Professor in Social Theory at Lingnan University, Hong Kong. Before coming to Hong Kong in 2000, he taught at the Memorial University of Newfoundland and Coventry University. His books include The Unmasking Style in Social Theory (2019), Hannah Arendt, Totalitarianism, and the Social Sciences (2010), and Caesar and the Fading of the Roman World (1997). He is the editor of The Portable Hannah Arendt (2002) and the co-editor and co-translator of the Penguin Classics edition of Max Weber’s The Protestant Ethic and the ‘Spirit’ of Capitalism and Other Writings.