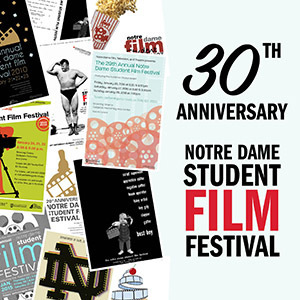 An annual launching pad for student filmmakers as they begin their careers in the film, television, and entertainment industries, the Notre Dame Student Film Festival screens films that were made by undergraduate students during the past year as class projects in the Department of Film, Television, and Theatre. As in recent years,audience members are invited to vote for their favorite film via text message. The Audience Choice Award will be presented to the student directors of the winning film after the final screening.

Shelter Me
Zach Lawson
The only hope for a million stray cats and dogs in Texas may be one woman…and her camera.

Emma.
Saskia Hennecke, Grace Tourville
Making the transition to college might be a challenge, but transitioning in college is definitely daunting.

Glacialis
Zach Huffer, Joey Warner
A scientist searches for the solution to save her town frozen in time.

Impression
Alex Mansour, Kenny Xu
A symphony of brush strokes paints the tale of a boy lost in the canvas.

Drift
Beatty Smith, Grace Tourville
Stranded on a country road? Welcome to the farmhouse over yonder.

Thou Shall Not Steal
Naj Harrabi, Hap Burke
Some home security systems are better than others.

Off Track, On Track
Jarissa Sabal, Brian Raab
A retired thoroughbred horse in the Bluegrass state still has a life to live.