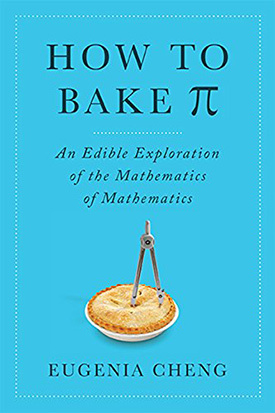 Mathematics can be tasty! It’s a way of thinking, and not just about numbers. In this talk filled with hands-on activities suitable for all ages, Eugenia Cheng, Ph.D., will teach surprisingly high-level mathematics by sharing unexpectedly connected examples from music, juggling, and especially baking.

Cheng is a mathematician and concert pianist. In addition to her post as Scientist in Residence at the School of the Art Institute of Chicago, she is an honorary fellow at the University of Sheffield, United Kingdom, and an honorary visiting fellow at City University London.

Cheng’s aim is to rid the world of math phobia. In addition to writing the “Everyday Math” column for the Wall Street Journal, she is also the author of “How to Bake Pi,” which was shortlisted for the 2017 Royal Society of Science Book Prize. Her latest book, “The Art of Logic in an Illogical World,” was released in July 2018.