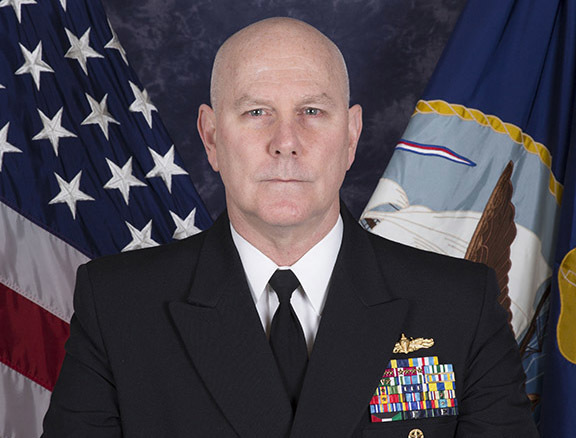 Admiral Christopher Grady (’84) from the US Fleet Forces Command

The event is free and open to the public. Please use the southeast doors (closest to the DeBartolo Performing Arts Center).

Adm. Christopher Grady is a native of Newport, Rhode Island. He is a graduate of Notre Dame and was commissioned an ensign through the Naval Reserve Officers Training Corps program. Grady is a distinguished graduate of Georgetown University where he earned a Master of Arts in National Security Studies while concurrently participating as a fellow in Foreign Service at the Edmund A. Walsh School of Foreign Service. He is also a distinguished graduate of the National War College earning a Master of Science in National Security Affairs.

At sea, Grady’s initial tour was aboard USS Moosbrugger (DD 980) as combat information center officer and antisubmarine warfare officer. As a department head, he served as weapons control officer and combat systems officer aboard USS Princeton (CG 59). He was commanding officer of Mine Countermeasures Rotational Crew Echo aboard USS Chief (MCM 14), and deployed to the Arabian Gulf in command of USS Ardent (MCM 12). Grady then commanded USS Cole (DDG 67), deploying as part of NATO’s Standing Naval Forces Mediterranean. As commander, Destroyer Squadron (DESRON) 22, he deployed to the Arabian Gulf as sea combat commander for the Theodore Roosevelt Carrier Strike Group (TRCSG) in support of Operations Enduring Freedom and Iraqi Freedom.