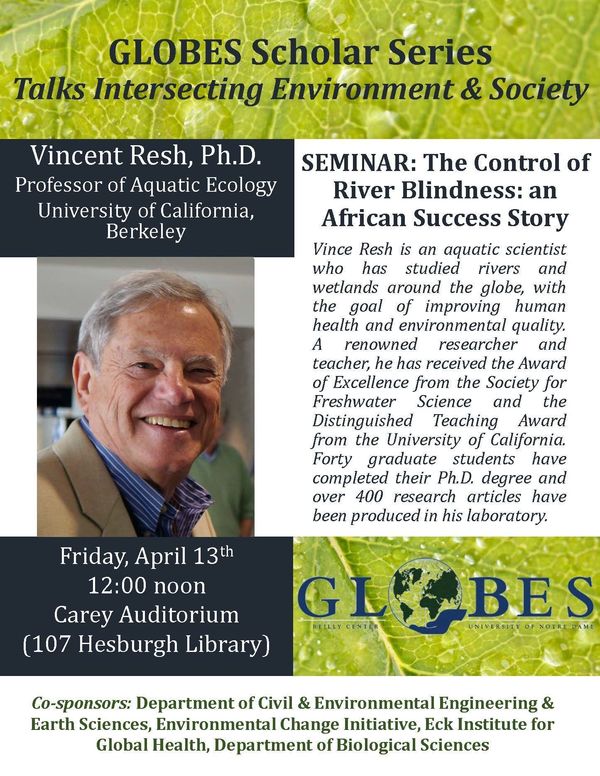 Vincent Resh is a professor of aquatic ecology at the University of California-Berkeley who has studied rivers and wetlands around the globe with the goal of improving human health and environmental quality. A renowned researcher and teacher, Resh received the Award of Excellence from the Society for Freshwater Science and the Distinguished Teaching Award from the University of California.

His talk is entitled “The Control of River Blindness: an African Success Story.” River Blindness (Onchocerciasis) is a human disease caused by a roundworm and transmitted by biting black flies. By the 1970s, it resulted in blindness rates sometimes exceeding 30% in communities living along the rivers of West Africa. Because these were the most fertile areas for agriculture, food security was threatened as large tracts of land were abandoned due to the disease. The Onchocerciasis Control Programme organized by the World Health Organization utilized a successful pesticide-drug distribution effort that resulted in near eradication of the disease in West Africa and resettlement of more than 66 million acres of land for agricultural production.

The GLOBES Scholar Series entails three interdisciplinary talks at the intersection of the environment and society. The series is sponsored by the Environmental Change Initiative, the Eck Institute for Global Health, and the Department of Biological Sciences. The Resh lecture is co-sponsored by the Department of Civil and Environmental Engineering and Earth Sciences. For more information contact Prof. Gary Lamberti.