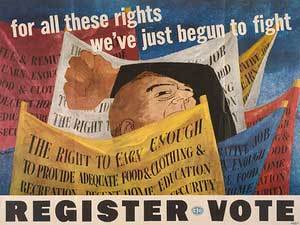 The American artist Ben Shahn created graphic art for the newly formed Congress of Industrial Organizations (CIO) from 1937 to 1947, including posters for the Steelworkers Organizing Committee in the late 1930s and for the CIO’s Political Action Committee (CIO-PAC) during the presidential and congressional campaigns of 1944 and 1946. This talk will explore the nature of these images and the challenges Shahn faced in representing the concerns of labor during a decade of increased labor activism, world war, and postwar political retrenchment.

Professor Pohl has published books and articles on Ben Shahn. Her textbook Framing America, A Social History of American Art (2002, 2008) integrates her continental approach to the study of art in the United States.