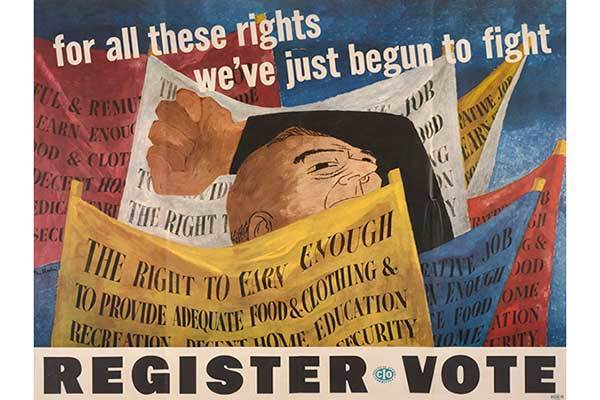 In the immediate wake of the Great Depression and World War II, the 1946 congressional elections proved pivotal in shaping the postwar United States, as Americans confronted whether to expand the consumer and worker protections of the New Deal or risk a return to an era of smaller government and unregulated business. As head of the graphics department for the CIO-PAC, the industrial union movement’s political action committee formed in 1943 to elect worker-friendly candidates, artist Ben Shahn (1898–1969) played a key role in illustrating the major themes from the campaign.

Organized in conjunction with Professor Daniel Graff’s “Labor & America since 1945” and Professor Erika Doss’s “20th-21st Century American Art” courses, this exhibition of four posters by Shahn provides a platform to explore issues related to the working classes, the proper place of labor unions in society, and social justice amid instances of flagrant police brutality.