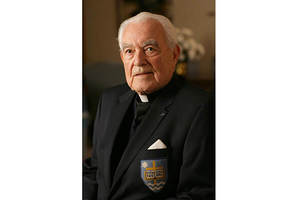 A special Mass will be celebrated to mark the 100th anniversary of the birth of the late Rev. Theodore M. Hesburgh, C.S.C., the University’s president from 1952 to 1987 and one of the most influential figures of the 20th century in higher education, the Catholic Church and national and international affairs.
University President Rev. John I. Jenkins, C.S.C., will preside at the Mass. Rev. Austin Collins, C.S.C., religious superior of Holy Cross Priests and Brothers at Notre Dame and professor of sculpture, will deliver the homily.

In addition to his 35-year tenure as Notre Dame’s president, Father Hesburgh’s other notable achievements and accolades included: