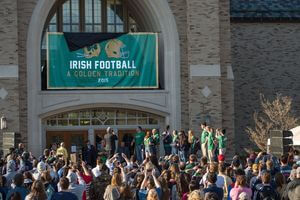 The Shirt 2017 will be unveiled outside the Hammes Bookstore during a celebration beginning at 4 p.m. The ceremony is open to the public and will feature entertainment from student groups, food and giveaways, along with this year’s edition of The Shirt.

Notre Dame Head Football Coach Brian Kelly is scheduled to unveil The Shirt 2017 at 6 p.m., and The Shirt will be available for purchase in the bookstore for $18 immediately following the ceremony. Students will receive a 15 percent discount for buying The Shirt on Friday. For the second year in a row, this year’s version of The Shirt will also be offered in a women’s cut style.

John Scully, a 1980 Notre Dame graduate, will be the guest of honor at this year’s unveiling. Scully co-wrote the lyrics to the famous song “Here Come The Irish,” which is played before kickoff at Notre Dame Stadium before home football games. Scully’s lyrics will appear on this year’s edition of The Shirt. An accomplished offensive guard during his time at Notre Dame, Scully received All-American honors in 1980. He went on to spend 10 years in the National Football League.

Every year, The Shirt Project designs a T-shirt for the upcoming Notre Dame football season. Proceeds from sales of The Shirt — believed to be the single highest-selling item of collegiate apparel in the nation — benefit student organizations, the Student Experience Fund and The Shirt Charity Fund, a resource for students who have extraordinary medical expenses. The Shirt 2017 will mark the project’s 29th shirt and 28th year.