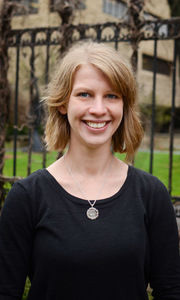 Nicole Winsor will discuss the question: If modernist montage is often regarded as the product of a shockingly new industrialized and urban modernity, why does it remain a prevalent form in works of art that emerge out of (post)colonial contexts where certain aspects of political, economic, and cultural development tend to be described as "uneven" and "backward"?

By placing Denis Johnston’s play The Old Lady Says ‘NO!’ in dialogue with the ethnographic surrealism of Australian and New Zealand drama, Nicole Winsor, a Ph.D. candidate in the Department of English at the University of Notre Dame, will take up this question, arguing that Johnston’s use of montage in the theatre values the destruction and debris of history and treats the past as a radically destabilizing force which has the power to challenge the cultural orders of post-Independence Irish modernity.

Nicole Winsor received her M.A. from the University of Auckland in New Zealand and is currently in her fourth year of a doctoral program in the Department of English at the University of Notre Dame, where she is also earning a graduate minor in Irish Studies.  She is a University Presidential scholar and a member of the International Network for Comparative Humanities. Her dissertation examines drama produced after periods of indigenous cultural revivalism in Ireland, Australia, and New Zealand and explores how geohistorical particularities impact the ways in which modernist creative innovations are generated and developed in “peripheral” regions of the globe. By focusing on Irish, Australian, and New Zealand postcolonial modernisms as they are made manifest in drama, she aims to add to current broader scholarly conversations about how we define the field of modernist studies in the twenty-first century.